The resources above are shown at a grade-thickness cut-off of 0.10 ft% eU3O8. The Technical Report for the four West Slope properties will be issued within 45 days.

Corey Dias, Anfield CEO, stated: “We are very pleased to receive an updated resource estimate for a portion of the properties at West Slope, which continues to hold additional historic uranium and vanadium resources within the project area. Globally, we view these resources as an integral source of material for our conventional asset production plan, which is underpinned by our Shootaring Canyon mill. Given the Company’s recent focus on our conventional asset base, and the advancement of plans to realize a path to production through this portfolio, today’s news underscores the strength of our burgeoning conventional mine-and-mill complex.

The continued geopolitical unrest in Eastern Europe and Central Asia has brought to bear the inherent uncertainty of the uranium global supply chain. We believe that a shift to North American supply is underway, providing Anfield with a significant opportunity to contribute to this effort.”

About The West Slope Project

The West Slope Project, located in Montrose and San Miguel Counties of southwestern Colorado, consists of nine Department of Energy (DOE) leases, associated with adjacent lode mining claims and leases, covering 6,913 acres on which past uranium production has taken place. Between 1977 and 2006, approximately 1.3Mlbs of uranium and 6.6Mlbs of vanadium were produced from these mines. 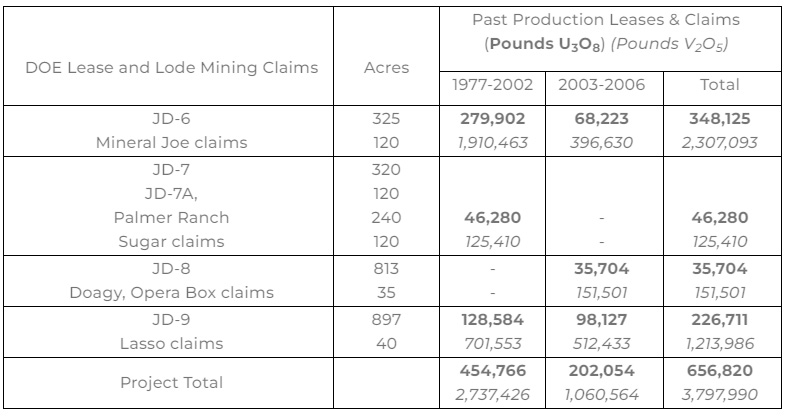 BRS Inc. is an engineering and geology consulting corporation with expertise in mining and mineral exploration. Of particular note, it specializes in uranium exploration, mineral resource evaluation, mine design, feasibility, mine operations, and reclamation. It has worked on numerous uranium projects including technical reports and feasibility studies for underground, open pit, ISR, and conventional uranium mills. Representative projects include technical reports and due diligence for project financing of conventional uranium projects including the Sheep Mountain Project in Wyoming, the Marquez/Juan Tafoya Project in New Mexico, the Coles Hill Project in Virginia, and numerous ISR uranium projects in Wyoming, Texas and Paraguay.

Douglas L. Beahm, P.E., P.G., the principal engineer at BRS, is a Qualified Person as defined in NI 43-101 with more than 45 years of professional and managerial experience. Mr. Beahm has a proven track record in a variety of mining and mine reclamation projects including surface and underground mining, heap leach recovery, ISR, and uranium mill tailings projects. Mr. Beahm’s experience includes coal, precious metals, and industrial minerals, but his emphasis throughout his career has been on uranium. Mr. Beahm has reviewed and approved the technical content of this news release.

Anfield is a uranium and vanadium development and near-term production company that is committed to becoming a top-tier energy-related fuels supplier by creating value through sustainable, efficient growth in its assets. Anfield is a publicly-traded corporation listed on the TSX Venture Exchange (AEC-V), the OTCQB Marketplace (ANLDF) and the Frankfurt Stock Exchange (0AD). Anfield is focused on two asset centers, as summarized below:

Anfield’s conventional uranium and vanadium assets consist of mining claims and state leases in southeastern Utah, Colorado and Arizona, targeting areas where past uranium mining or prospecting occurred. Anfield’s conventional uranium assets include the Velvet-Wood Project, the Frank M Uranium Project, the West Slope Project, as well as the Findlay Tank breccia pipe. An NI 43-101 Preliminary Economic Assessment has been completed for the Velvet-Wood Project. The PEA is preliminary in nature, and includes inferred mineral resources that are considered too speculative geologically to have economic considerations applied to them that would enable them to be categorized as mineral reserves, and there is no certainty that the preliminary economic assessment would be realized. All conventional uranium assets are situated within a 200-mile radius of the Shootaring Mill.

Anfield signed a Resin Capture and Processing Agreement with Uranium One whereby Anfield would process up to 500,000 pounds per annum of its mined material at Uranium One’s Irigaray processing plant in Wyoming.

On behalf of the Board of Directors
ANFIELD ENERGY INC.
Corey Dias, Chief Executive Officer

THIS NEWS RELEASE HAS BEEN PREPARED BY MANAGEMENT OF THE COMPANY WHO TAKES FULL RESPONSIBILITY FOR ITS CONTENTS.

VANCOUVER, British Columbia, Sept. 20, 2022 - Anfield Energy Inc. (TSX.V: AEC; OTCQB: ANLDF; FRANKFURT: 0AD) (“Anfield” or the “Company”) is pleased to announce that Mr. Kenneth Mushinski has agreed to join the Board of Directors of Anfield as non-Executive Chairman....

VANCOUVER, British Columbia, June 08, 2022 - Anfield Energy Inc. (TSX.V: AEC; OTCQB: ANLDF; FRANKFURT: 0AD) (“Anfield” or the “Company”) is pleased to announce that it has completed the settlement (the “Debt Settlement”) of US$18.34 million of indebtedness which was...

Transaction Highlights Retirement of US$18.34 million of outstanding debt held by UEC (and previously U1A), resulting in Anfield now being debt free and UEC becoming the largest shareholder (~16% undiluted ownership). The transactions include a swap of UEC’s Slick...

VANCOUVER, British Columbia, March 23, 2022 - Anfield Energy Inc. (TSX.V: AEC; OTCQB: ANLDF; FRANKFURT: 0AD) (“Anfield” or “the Company”) is pleased to announce that it has commenced a comprehensive review of its conventional uranium assets, including the Shootaring...