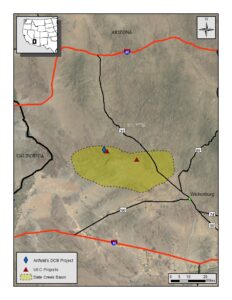 The Date Creek Basin (DCB) project consists of 24 unpatented mining claims situated in Mohave County, Arizona, about 110 miles southeast of Kingman, Arizona in the Date Creek Basin, which is a historic Uranium producing region.  A number of companies explored the DateCreekBasin property and the immediate vicinity in the 1960s-1970s, including Hecla Mining, Getty Oil, Homestake Mining, and Public Service Company of Oklahoma, with a combined total of 443 exploration drill holes.  The most recent exploration was conducted in 2007, resulting in 35 exploration drill holes. Production from the DCB was reported between 1955 and 1959 at 33,593 lbs U3O8 with an average grade of 0.16%.